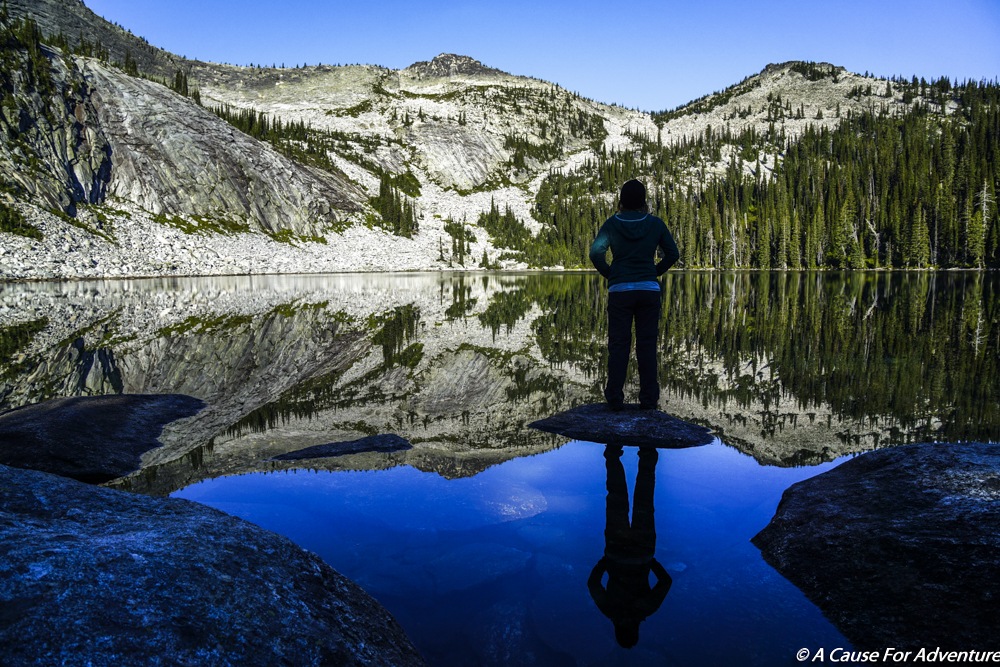 A relatively small range that is unique in many ways and is geologically older than the Rocky Mountains, the Selkirks confirm that good things do indeed come in small packages. 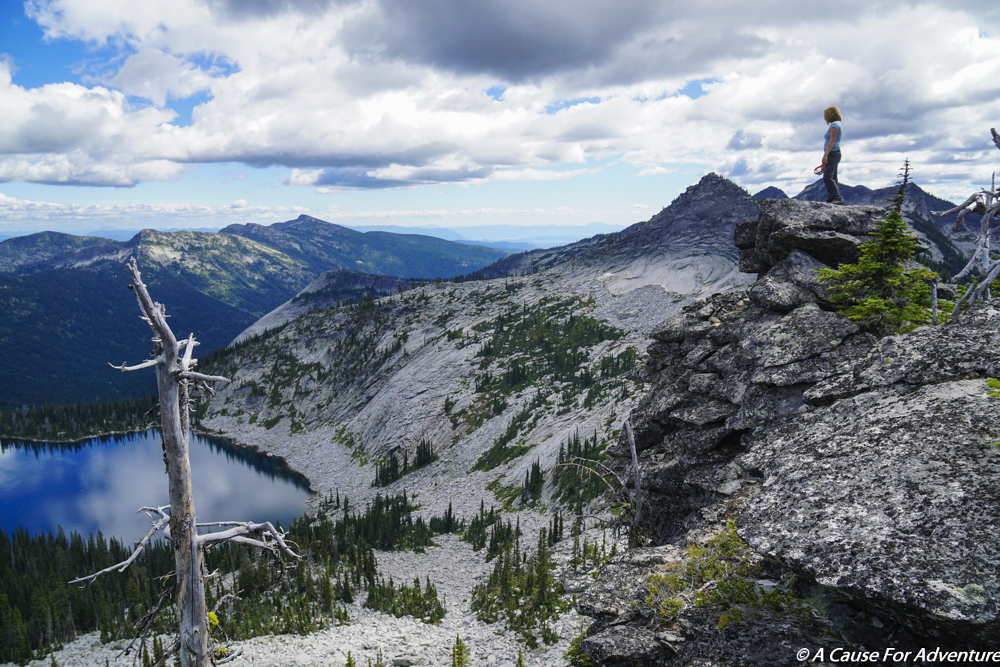 An absolutely stunning landscape of soaring granite slabs and summits, crystal clear lakes, and dense forests of pine and fir trees will treat the intrepid backpacker to a smorgasbord of visual delights. Stumble around in acres of dark green huckleberry bushes, which at the right time of year (for us, it was late August) are loaded with the dark purple berries that are very similar to blueberries, and will stain your hands and teeth a sinister shade of purple. Loaded with wildlife, you can expect to see evidence of elk, moose, fox, and one of the last populations of grizzly bears in the lower 48. Although we didn’t see any evidence of bears, there are estimated to be 50-70 bruins currently active in the Selkirk Recovery Area and bear precautions must be followed. One can also expect to see abundant bald eagles and lakes bubbling with feeding cutthroat trout in the evenings. 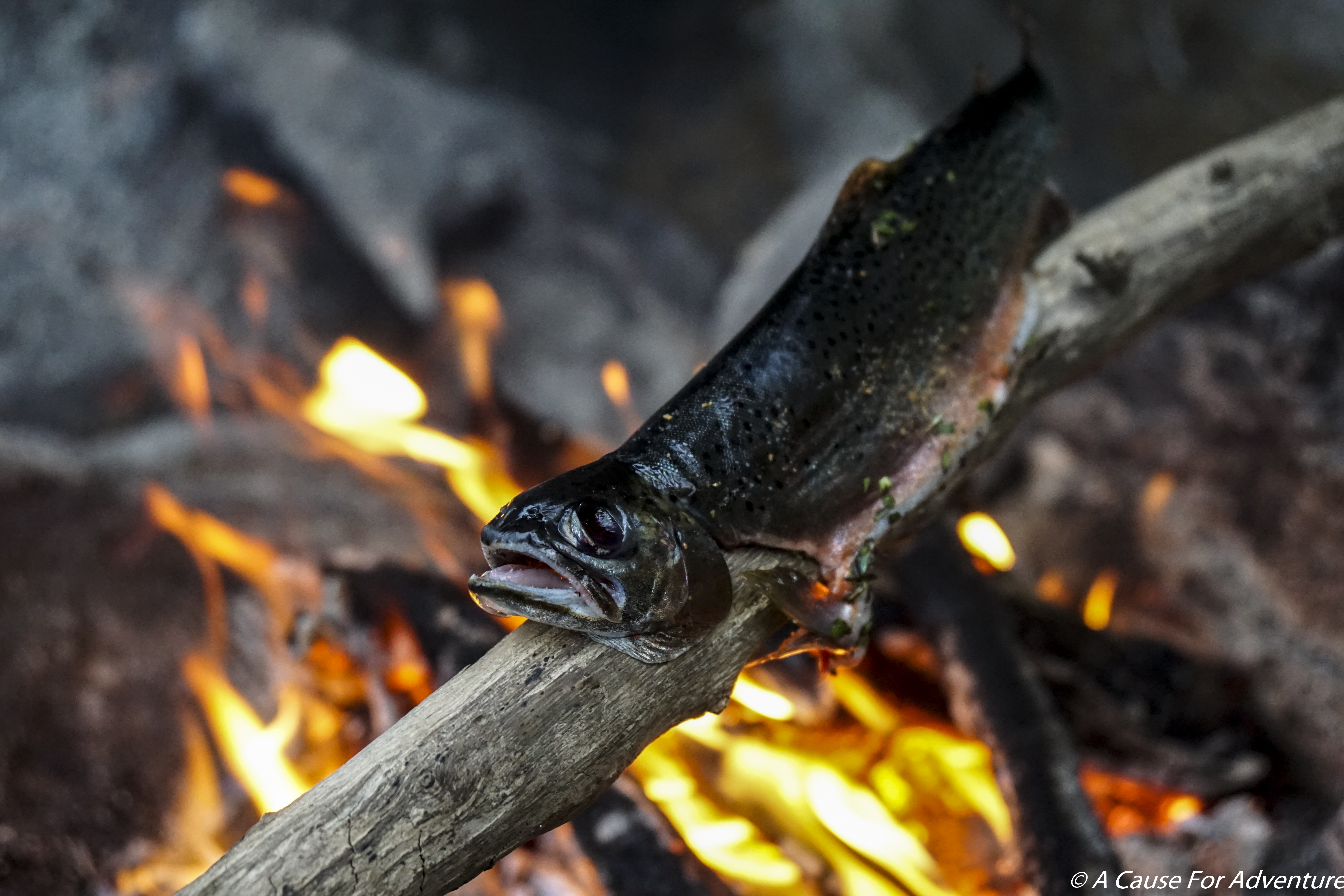 We hadn’t planned on going to the Selkirks. The whole thing started when a good friend by the name of Shaggy Thompson decided to get married in his home turf of North Idaho. We figured since we were driving all the way up there from Central California, we would make a trip out of it and spend a couple weeks exploring, backpacking, visiting friends and family, and sampling various micro-brews as we drove 3,112 miles in one big loop that took us through California, Nevada, a corner of Montana, the entire length of Idaho, all the way across Washington to an island, through Oregon, and finally another half of California.

We had initially planned on hiking a 54 mile loop in the Sawtooth Range of Southern Idaho the week before the wedding. I had spent a week in January 2016 ski touring and yurt camping in the Sawtooths and was humbled by their beauty, especially in the winter and buried in two feet of new snow, but that’s another story all together. Based on those experiences from earlier that year, I knew that I would be back. So when Shaggy announced his wedding, I immediately knew where our first stop would be, the Sawtooths.

But sometimes things just don’t go as planned. Now and then outside chaos factors just barge in and force change, so it’s good to be adaptable and have a backup plan. We had been watching the fire for a couple weeks prior to the trip, so we knew it was still burning, but by all accounts from rangers and friends living in Sun Valley, the smoke wasn’t too bad. We figured on using the White Cloud Range as our backup plan, and plotted out a good, albeit shorter, loop in those mountains if the ‘tooths were burning. Spirits were high as we departed Sun Valley with positive reports on air quality and we were psyched to get on the trail the next day after 18 hours of driving. It was after dark as we headed down from Galena Summit when I first smelled it. The thick, dank smell of a forest that is burning, like a giant campfire, but not nearly as fun. Then we started seeing ash in the headlights, when the full moon rose, it was a deep rose color and we could taste the smoke as my eyes started to burn a little. All we could do was spend the night at the trailhead and hope for the best. We chose to camp at the trailhead of the White Clouds thinking our backup would be the better call since there were two fires burning, one at each end of the Sawtooths. 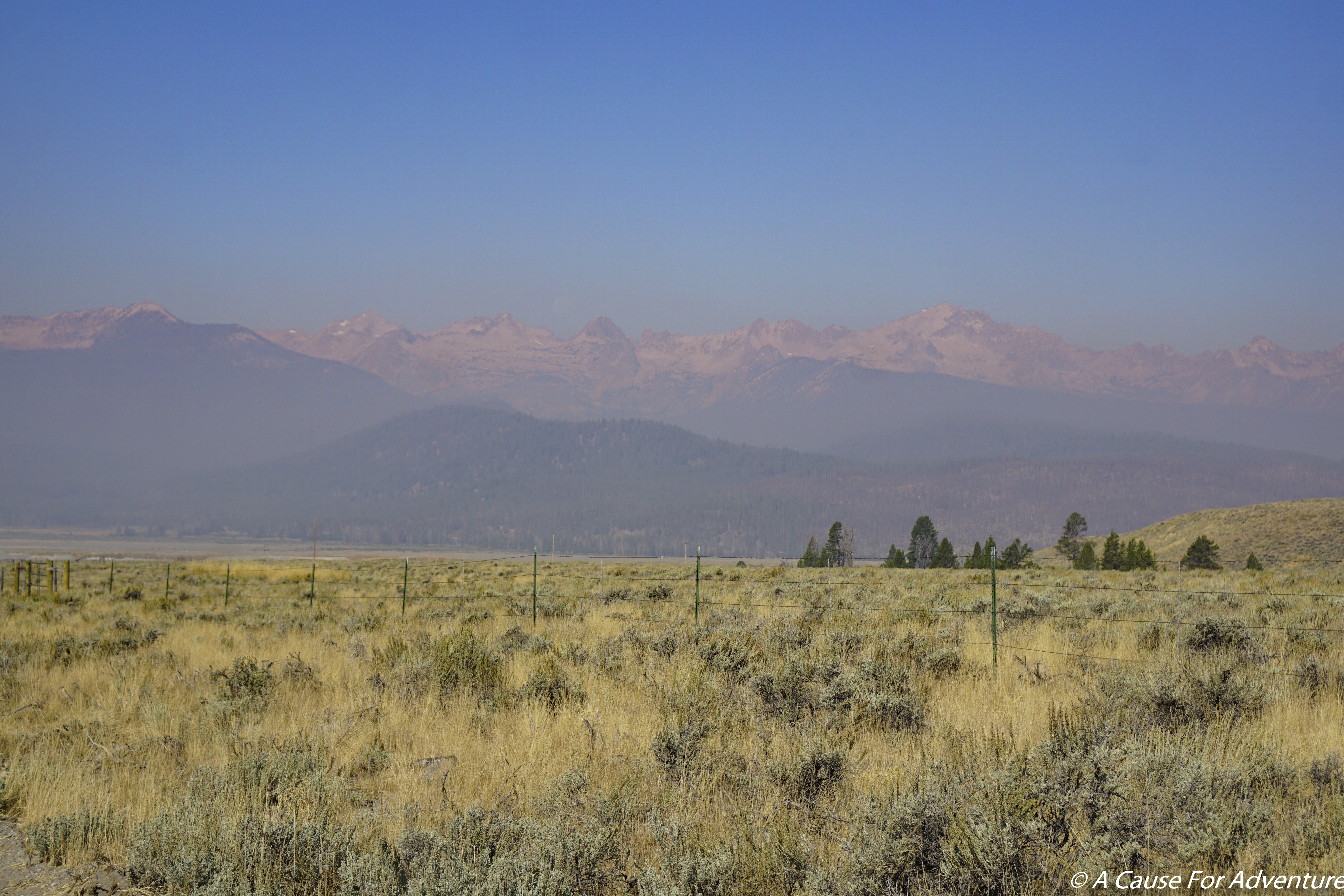 We awoke to burning eyes and Lisa had had a couple nasty coughing fits in the night. I had just finished fighting a fire in California and was looking forward to some fresh air. The writing was on the wall, plans A and B are shot. With no plan C, what to do? Let’s call Shaggy, this is Shaggy country. “C’mon up! No fires up here, clear as a bell.” Whatever that means. So we did, but not before driving through the Bitterroot Range of Western Montana, which, believe it or not, was on fire.

We arrived in Couer d’Alene that afternoon, and fantastically coincidentally, in the seven hours it took for us to drive all the way up through Idaho, a fire had started, taken hold, and completely smoked out the entire area. All right, plan D, We’re just going to keep on driving until we hit the North Pole, probably no fires up there. One problem though, our passports are in California. Okay, we’ll just keep driving until we have to stop, and we’ll hike there. Out came the maps and presto, The Selkirks. 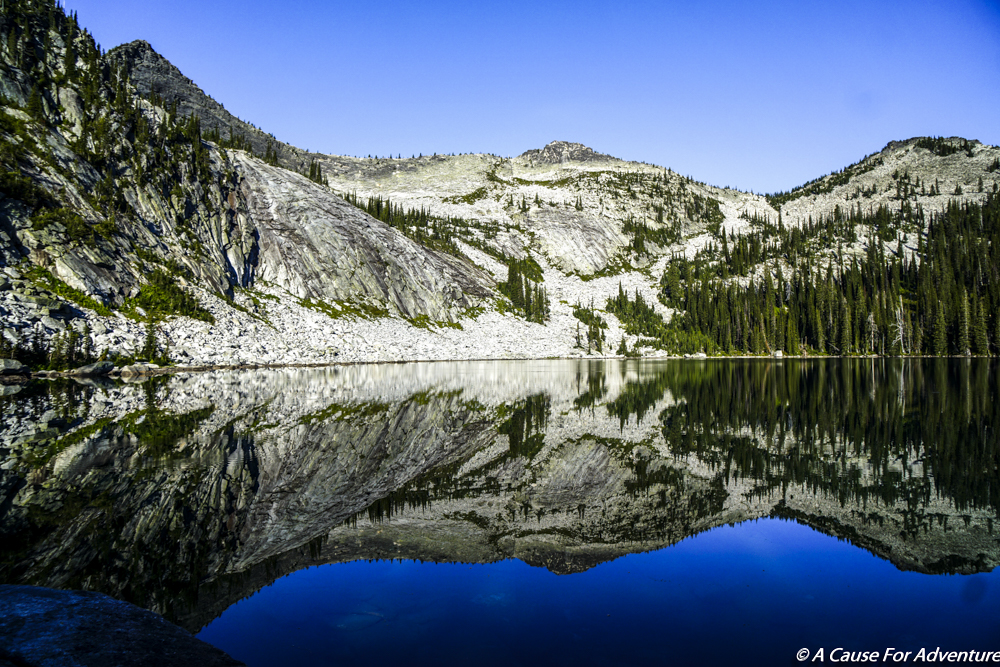 It took some work, but the internet is full of information and slowly we began to formulate a plan. Like I said before, the range is small and very undeveloped. There isn’t a massive network of well-trodden trails and steel signs at every fork to keep you on track. In fact, the only map we could find was a USGS topo that had to be printed and purchased from a printer’s office, and this didn’t show trails, just contour lines. Even the ranger station, good intentions and all, was virtually no help in trying to plot a 30-40 mile loop. So it seemed like our best bet was to hike in with a 3 days supply, set up a basecamp and just explore. And explore we did. 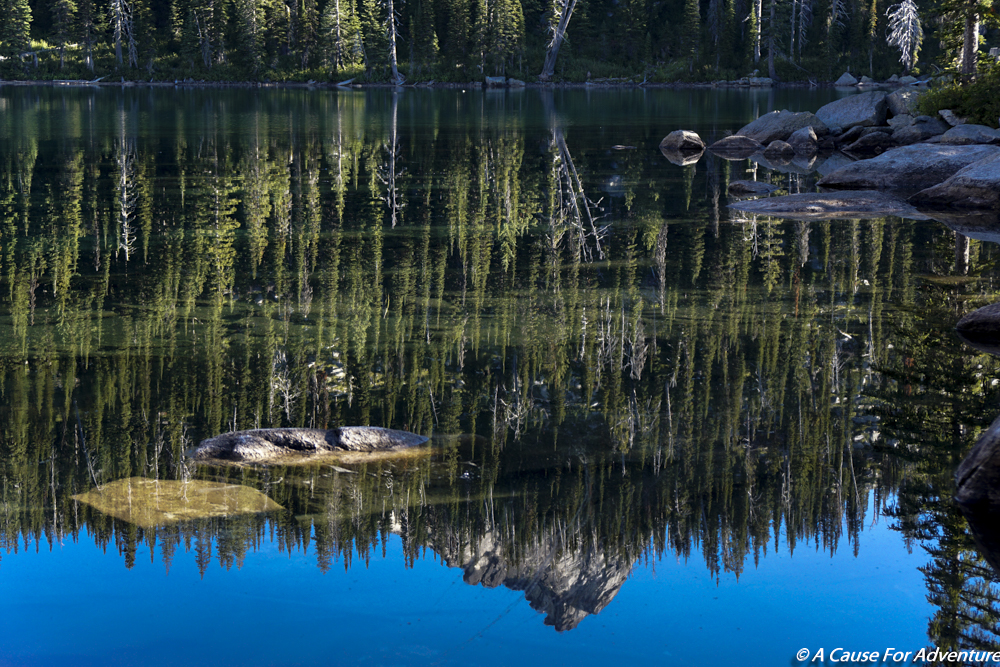 Camp was set at Harrison Lake, just a short 3 miles from the trailhead. It’s a very picturesque lake with the steep and craggy Mt. Harrison looming overhead to the north.

An hour hike around the east side of Harrison and we were able to access the 3rd class NE shoulder and easily tick off Mt. Harrison. From here you can retrace your approach back to the lake or, for the emboldened climbing savvy types, downclimb the obvious exposed 4th class north ridge and traverse under Harrison’s overhanging west face. It is circuitous, but you will eventually reach the ridge that heads west from Harrison. Terribly exposed and sometimes a bit dirty, the exciting 4th class eventually backs off to 2nd-3rd class hiking and scrambling as you follow the obvious ridgeline completely around Harrison Lake, bagging numerous sub peaks and summits along the way. Some exposed, some not, all gorgeous and worth it. 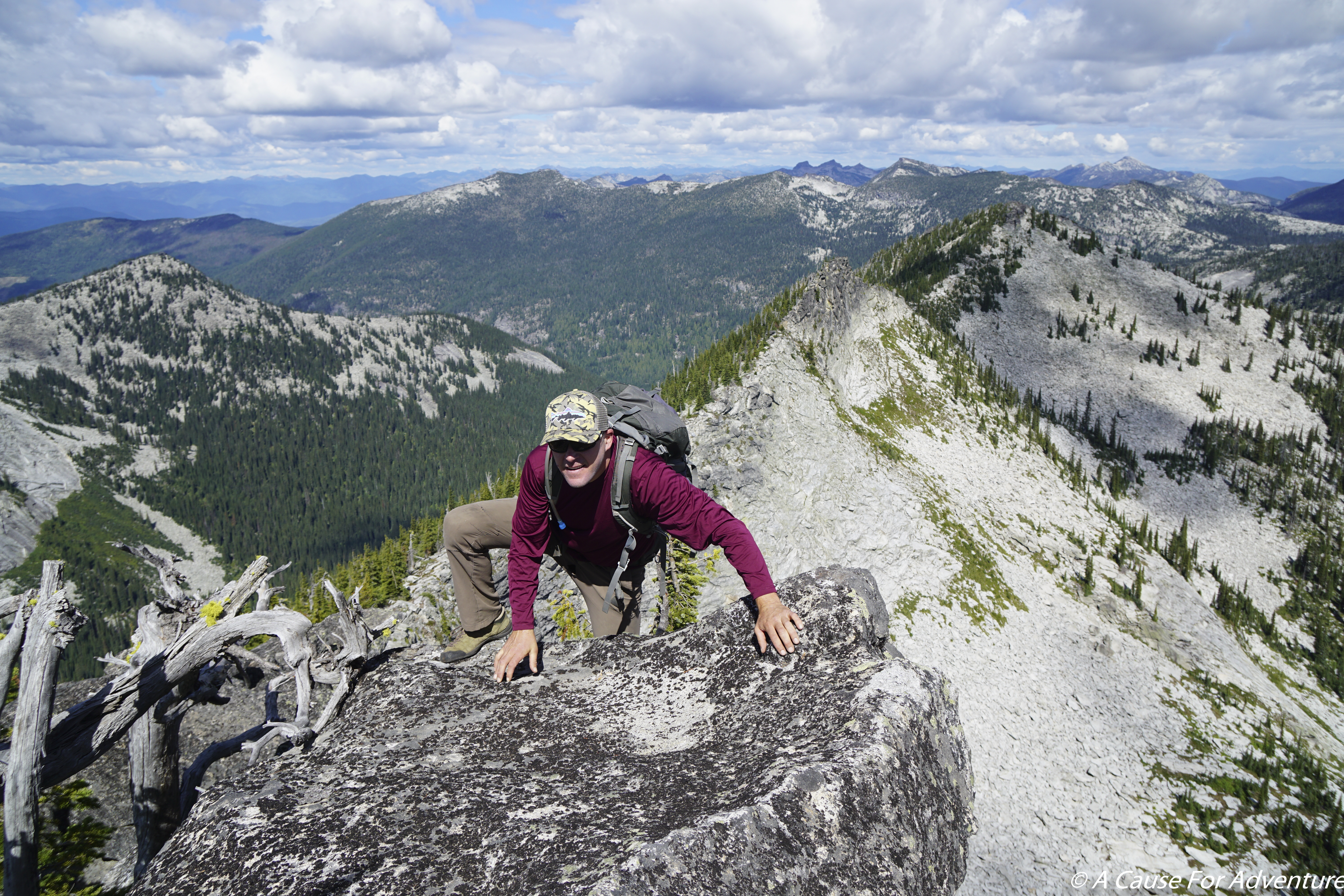 The final one, which we called Peak 7,080 for it’s elevation, leaves you at a cross roads of sorts. One can either head to Little Harrison and Beehive Lakes via 1.5 miles of alpine traversing, then return via drainages and a faint trail. Or, one can drop in to the east, down the obvious ridge, and continue the Harrison Cirque until you are above Pack Creek, which is the outlet of Harrison Lake. Then, very carefully navigate the slabs well past the lake itself and start looking for weaknesses in the slab descending to the east. Stuff yourself with huckleberries as you pick your way down down down. Eventually you will hit the very faint trail from Beehive Lakes noticeable only by the occasional cairn. 20 minutes back up the creek and you pop out at camp and the lake. 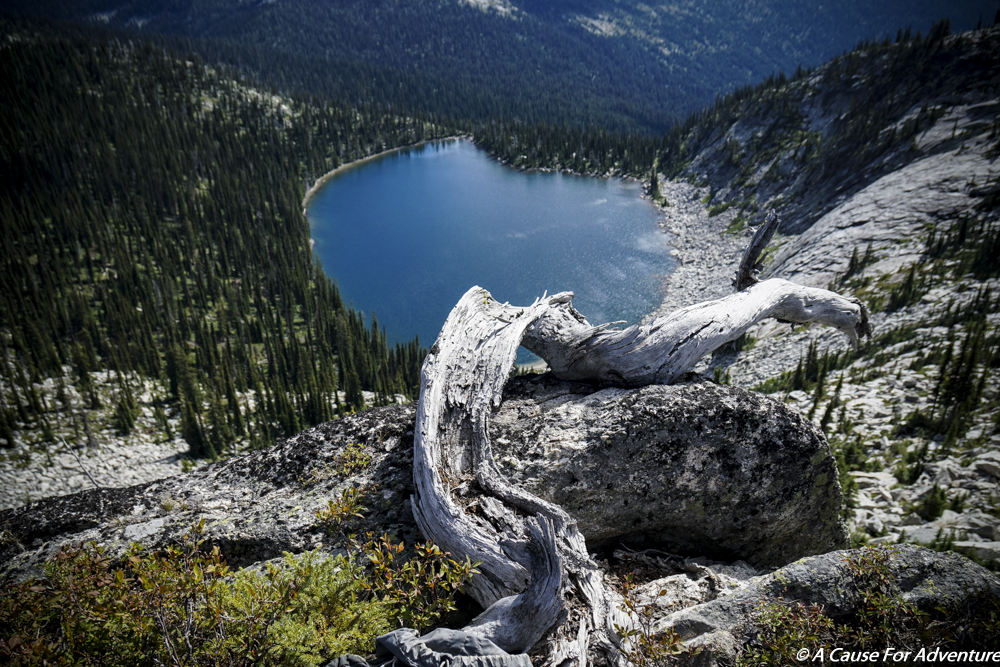 The whole lap can be done in a long day, or it is possible to escape between Harrison and Peak 7,080 and come back the next day to continue on. The following day could be used to move camp over to Beehive Lakes for a night at a new location. Then follow the Beehive Lakes trail out to the dirt road the following day. Allowing for a loop, instead of in and out on the same trail is always preferable in my opinion.

With the easy approach, secure bear boxes at Harrison and Beehive lakes, and the abundance of wildlife and huckleberry bushes, the Selkirks were a very pleasant plan D. Even more enjoyable and unexpected was the element of the unknown. We didn’t have endless information and really had no idea if some of those 4th class exposed ridges would go. We only had one USGS quad, so we were unable to name peaks in the distance and other lakes that were actually quite nearby. And bears. Anytime I’m in grizzly country, and aware of my position in the food chain, my senses get super alert, smells are smellier, sounds are soundier, and shadows tend to be a little scarier. I mean, who wouldn’t love holding their breath while thumbing the pin on a supersized can of bear spray when some big mammal comes crashing through camp in the middle of the night? Sometimes I felt very small in even a small mountain range, and I wouldn’t change a thing about that.

From Sandpoint, Idaho: Head north on US 95 toward Bonners Ferry. Drive 10.5 miles, cross the Pack River bridge and turn left on Pack River Road No. 231. Drive 20 miles and look for the small Trail N0. 217 at the trailhead on the right side of the road.

From Bonners Ferry: Turn west at the City Center sign onto Riverside Avenue. The City Center sign is just north of the Kootenai River Inn on US 95. Follow Riverside Avenue for 5.4 miles to the Kootenai National Wildlife Refuge. Continue past the KNWR on the paved road for 1.3 miles. Turn left onto signed Myrtle Creek Road 633. Travel 13.6 miles to signed FR 2409 which is the Upper Myrtle Creek Road. Turn right and travel 1.4 miles (with one switchback) to the end of the road. Harrison Lake Trail 6 begins here. There is parking for 6-8 vehicles.

No permits are required. More information can be found by contacting the rangers at:
Kaniksu National Forest, Bonners Ferry Ranger District. 208-267-5561.